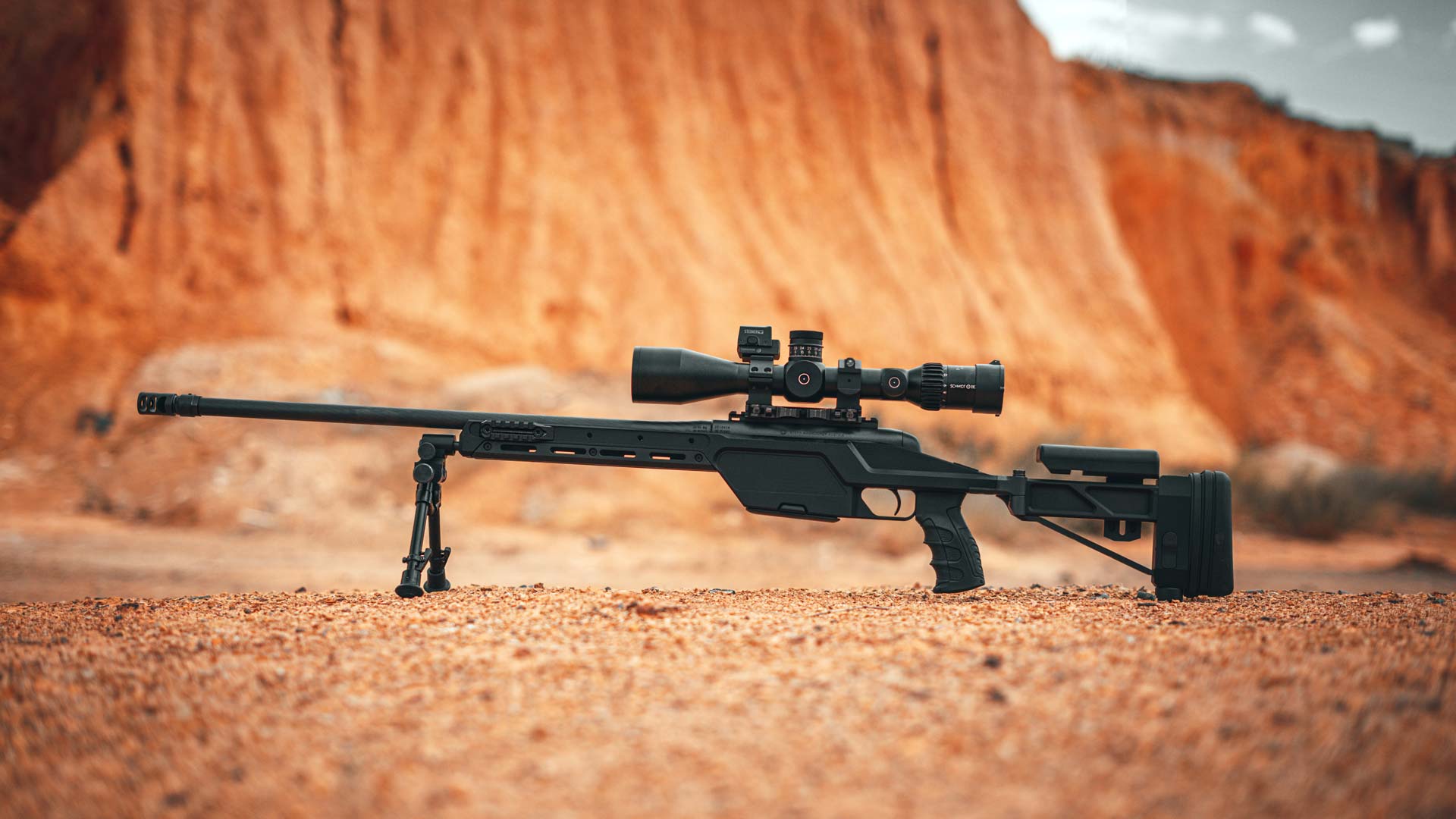 Getting into shooting long-range, and building a long-range rifle is a new world to a lot of shooters. Many people shoot their entire lives thinking 100 yards is a far shot to make. If they can hit a pie plate with their hunting rifle they consider that “good enough.”

When you start reaching 5 or even 10 football fields and making consistent hits, it really gives you a new level of respect for the sport. And it doesn’t have to cost you more than your mortgage payment to get involved with long-range shooting.

One of the biggest decisions to make is going to be if your gun is strictly a target rifle or if you’re going to use it for hunting as well. A PRS Match Rifle can weigh 20lbs to help keep recoil down, while even a 10lb hunting rifle can feel very heavy after a few miles of hiking. Ringing steel and harvesting game have very different energy and projectile requirements. If you want to learn more about a hunting rifle, read more here.

Figure out what your maximum shooting distance will be. This will help you figure out the caliber, scope, and barrel length.

If your goal is to shoot the maximum distance at the local 400-yard range, you can look at a totally different setup than if you’re trying to shoot a mile.

When picking your long-range rifle cartridge, downrange energy matters much less than with a hunting rifle. This is why cartridges like the .224 Valkyrie and 6.5 Creedmoor were created. Taking a well-known hunting cartridge and necking it down to a longer, lighter, and thinner projectile almost always makes a better target rifle.

These thinned-down projectiles will shoot much flatter than their hunting counterparts.

The 5.56 or .223 is designed to be supersonic at 500 yards. You can find a ton of different setups capable of your local 400-yard range with this cartridge, which is low recoil and great for beginners. Heavier projectiles may be used for some hunting.

You can glass bed a Remington 700 or throw something in a chassis and have less than $1000 invested including glass. MDT makes some great chassis systems as well when you can find them in stock.

The .224 Valkyrie uses the same overall length as .556, with a much larger casing and longer bullet. This allows less bullet drop and wind drift at distance with the same AR-15 lower as your .556 or .458 SOCOM. Many companies had issues with stabilizing the round, but a few people were making consistent hits at 1000 yards with an AR-15 platform.

While many people have had issues with accuracy, it seems to be a reamer issue that can be resolved by a properly made barrel.

Many people love shooting 600+ yards with Grandpa’s old bolt action rifle. Nowadays, you can get an 18” Bull Barrel capable of 800-yard shots for under $1000 without the glass on top. Ammo was once found at amazing prices and it could also be used as a hunting rifle. With all the advances in modern target cartridges, you rarely see someone shooting .308 on the leaderboards anymore.

Ruger now makes the Hunter American, which is their Ruger American rifle in a MAGPUL Hunter chassis. At under $800 new, this is a great way to get into long-range shooting.

A .308 casing necked down to a 6.5mm instead of 7.62mm. A lighter, longer bullet allows this cartridge to reach out well past where the .308 Winchester or 30-06 can. The lighter bullets are less affected by wind as well.

While the .308 may beat it for energy delivered within common hunting ranges, you can reach out much farther with less correction when ringing steel. This cartridge is often referred to as “boringly accurate” due to how flat it shoots at distance.

This cartridge is the .308 Winchester if you fed it HGH and steroids during its formative years. Heavier 220gn projectiles will remain supersonic out to 1,500 yards. This means it has the energy to drop a grizzly bear or anything North America has to offer for hunting as well.

Flatter shooting than the .50 BMG, and capable of piercing armor at 1,000 yards. Several shots have been recorded over 1500 yards. The cartridge is capable of maintaining supersonic speeds at 1,900 yards. When only the farthest-reaching rifle will do, choose the .338 Lapua. Be prepared to break into your kid’s college fund, though, as a scoped rifle could easily cost $10,000.

Picking a scope may seem like a daunting task if you have no idea where to start. However, this step is vital to the effectiveness of your long-range rifle build. All the numbers can seem very confusing and how much magnification is enough? Which focal place is right for you?

A lot of people, including our special operations snipers, will run a fixed power scope. These will have fewer moving pieces and are generally more rugged and lighter than an adjustable magnification scope as there just aren’t as many moving pieces. You don’t have to worry about where your magnification ring is set or whether the threads are going to strip out.

Leupold makes some awesome glass, and they’ll warranty a product you bought used off eBay 10 years ago.

Most people will end up with a scope that has adjustable magnification, which will cover more scenarios during hunting or at the range. A 24x fixed power may sound great at 1000 meters, but when a deer walks in front of you at 30, you may have a difficult time figuring out where you are even aiming.

If you’re looking to ring steel at 500 yards and drop deer at 75 or less, a Vortex 1-8x Strike Eagle may fit the bill perfectly. These guys also offer a lifetime VIP warranty.

Reaching out past 500 yards and a 6-24 starts to shine. Just be careful to be at the correct magnification if you’re using sub-tensions on a variable power scope. Being off slightly can change your holds by a huge margin. This brings us to our next point.

First Focal Plane scopes are generally designed for people who change distances very quickly instead of as a dedicated long-range rifle. a FFP scope means your holds won’t change as you increase magnification. This is because the reticle changes size along with the target as you increase your magnification. So holding 8 MOA at 400 yards is the same dash at 6x, 14x or 24x. The mechanisms required to make this work properly add weight as well as cost more to produce.

The only other issue I have found is when trying to really reach out to the furthest distances and shooting at a smaller target. Using the full magnification can make the reticle so large that it actually covers a smaller target, so those spending a lot of time at full zoom may want to look more into a First Focal Plane scope.

This is what most budget scopes will use due to the cost of manufacturing. The easiest way to be sure if you have an SFP scope is to look through it while you are zooming in. If the reticle stays the same size and thickness, but the target gets bigger you have a Second Focal Plane scope. A 1 MOA reference mark is only 1 MOA at the correct magnification which depends on the model and manufacturer, although most are correct at full zoom.

This is most beneficial for people who spend a lot of time at their minimum or max zoom setting instead of back and forth between them. You can find your target at lower magnification in a wider view and then zoom in on your target for your hold-over.

The materials you choose for your chassis can make your long-range rifle a beast to carry or make you miss the big red barn you’re standing in.

These will be found on the lower-budget rifles at Wal-Mart or Dick’s Sporting Goods. They generally won’t have any kind of bedding and are very flimsy. A light breeze will twist the plastic on these bad boys. Loading your bipod will certainly throw your groups off as well. The best way to shoot these chassis accurately is off sandbags or your hunting backpack.

Polymer is stronger than synthetic materials while still being much lighter than going with a full aluminum chassis. Companies like MAGPUL have taken most of the flex out of the stock while adding an aluminum block for the barreled action to mount to. This improves rigidity while still cutting down on the weight from a bedded wood or aluminum stock.

Heavier and sturdier than the polymer, most of these stocks will be a stiffer version of your normal hunting stock. No pistol grips or MLOK attachment points for your gadgets and doo-dads here. These are for people that love the look of an old hunting rifle but want the sturdiness and stability that the past 30 years have brought to the game of precision shooting.

Fully free-floated rails, and actions needed in aluminum blocks. These chassis are far from light, but they will certainly bring your groups tighter than any other chassis we have found. MDT makes a few models that are great for a long-range rifle and allow plenty of rail room for adding weights to the rail of the rifle. This is to further reduce recoil and provide a more stable platform for competition shooters.

Many of the stocks on lower-end or budget rifles can have a lot of flex in them. Loading your bipod can push the stock into the barrel at different pressures resulting in changes in the harmonics of the barrel. This will make a good zero nearly impossible and can ruin groups that were shot from the best barrel and action money can buy.

Pillar bedding uses posts that are mounted into your stock to help stabilize the action. This is usually considered the minimum to get better groups. They give your action screws something stronger and stiffer than the synthetic plastic stock material to anchor the action to.

A step up from Pillar bedding in cost and weight. Usually a large chunk of aluminum is embedded into a polymer or wooden stock to add rigidity and ensure a consistent free float along the full length of the barrel. Aluminum chassis will have a version of this that is part of the chassis itself.

This is a great method to add to any form of bedding. You can use Marine Epoxy, 2 Part Epoxy, or JB Weld to give your action more contact surface with the chassis or stock. Just make sure to use Vaseline to ensure your action doesn’t get stuck to the new chassis. I have seen this alone cut group sizes in half on even the worst rifles I have shot.

A proper trigger will have nearly zero creep and very little over-travel. Once the shot breaks, the trigger shouldn’t have a bunch of slop before it bottoms out. Some of the factory triggers I’ve used could lift the barreled action off of the bench without engaging the firing pin. This is not going to work with a long-range rifle.

Triggers used for PRS matches are generally measured in ounces instead of pounds like a hunting trigger will be. If your rifle is going to have multiple uses, make sure to error on the heavier side for your trigger.

The best trigger we have found is the TriggerTech Diamond. Adjustable down to just 4oz of weight and up to 32oz. While this is a little light for hunting, it works great for bench rest shooting. TriggerTech designed their triggers with a zero weight break then built the pull weight in on top. This results in a crisp, repeatable brake that won’t change over time like a Timney Trigger will.

Get building and comment below about your favorite long-range rifle.